Recently in Spanish we just completed a project where we wrote children's books that will be sent off to Nicaragua for the less privileged children there. We are sending the books to Nicaragua to help kids learn how to read, also to grow their imagination My idea comes from my love for the ocean and how I love to help people, so naturally that is what my book is about. I hope that the kids will learn that there are opportunities to help people everywhere, you just have to look. I also want them to learn that humans aren’t the only people that can help, other living things help each other as well. 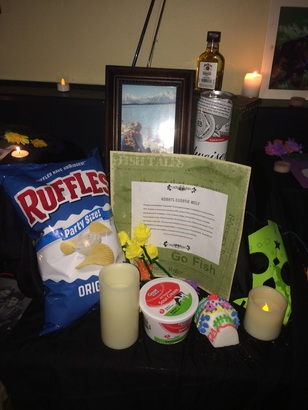 Dia de los Muertos was originated from Mexico, when the Spaniards came home from trying to find Asia, but instead found America. Christopher Columbus, one of the spaniards, was the leader of this expedition. The Spaniards collaborated with the Native Americans that they had just met and introduced them to catholicism. The Native Americans also had their holidays, which Dia de los Muertos was one of them. The Spaniards had children with the Native Americans and decided to mix both of their traditions and made Dia de los Muertos more of a Catholic holiday than it used to be. It is celebrated in Spain, Mexico, and America. It is celebrated November 1st and 2nd.  Most families go to the grave site of their loved ones and create an ofrenda, alter, with the loved one's picture, favorite food, water, marigold flowers, sugar skulls, and candles. The favorite food, marigolds, and candles lead the spirit back to their family and alter. The water and salt refreshes and cleanses the spirit after the long journey home.

For Dia de los Muertos I chose to celebrate my grandpa Bob. He died about 12 years ago and I didn't know him that well and this project would help me get to know him better. I didn't realize that we wouldn't have that much room to decorate our ofrenda, so mine looks a bit cluttered. I have a fishing pole and empty amo box. He really like to fish and hunt. His favorite beer was Budweiser and his favorite mixed drink was Squirt and Jim Beam. In class we created and decorated sugar skulls, which you can see on my alter. We also made papel picado, a decorative paper, which is not not on my alter.

I really liked doing this project because I felt that I got to connect and get to know my grandpa better. I learned a lot about him that I probably wouldn't have learned if it weren't for this project. This project was worthwhile because I got learn about the holiday and traditions. I like how we got to make sugar skulls, papel picado, and paper marigolds. I also really liked how we got to personalize the project to our life. My written description is below:
​
​Robert Eugene Wolf