Close your eyes and imagine yourself walking through the foggy Vietnam Jungles, hearing the ribbit of frogs and slither of snakes. Imagine watching a family discuss the war and how they felt about their son leaving. Imagine listening to stories told by Vietnam War veterans and how they got through the war. That was what our Truth of War exhibition was, we wanted to let the audience and visitors feel like they were in Vietnam but still educating them about what the soldiers had to go through on a daily basis. The visitors would watch a short scene, played by the students, about a family whose son was at war. We learned about their feelings and who they were supposed to trust. After you learned about what the families were going through, you went to the next room.
“Welcome to Vietnam, please write your name on a dog tag, we are going to need to to identify you if and when you die, in order to send you back to the correct family,” was the first thing you heard when you walked into the Vietnam Jungle. This room taught visitors about what life was like on the battlefield and what soldiers had to go through. We talked about traps that the American Soldiers were caught in such as the mace, grenade in a can, and punji sticks. These were all horrible traps that caused Americans suffering and eventually death. We also had a medical scene, so visitors could see what it was like if you did get injured and only had limited supplies. Along with the traps and medical scene we had a multiple infographics about Agent Orange, helicopters, and other traps. Once you exited this room, you were immersed into soldiers emotions, there were letters hanging from the ceiling that were like the ones that the soldiers would write to their families back home. The other rooms educated you about protests and and how Vietnam felt about the war as well.
I jumped into this project after all of the students learned the background knowledge, so I was confused and didn’t know much about this war. The only knowledge I had was from the book The Things They Carried  by Tim O'Brien, and other articles I read. I was excited to be in a group that I was passionate about and that I wanted to learn more about. I don’t think that I strengthened any skills during this project, if anything I weakened some strengths. I was the lightning rod for our group, meaning I told my group what needed to be done and helped people stayed on task. However, I think that since I was in a new class with new people I was afraid to speak my mind and speak up. I kept our group on task and pushed our group to keep refining out final room, but I think I could’ve had better communication skills with my group. Our group had a hard time starting off with an idea and we went through a lot of refining with the help of project managers. In the past I have always just gone with the first idea that I have and not given it much more thought. I am glad that I realized that this was not our best idea and it had the potential to be amazing, in the end I was so proud of my group because we made an unforgettable end product.
When I think about war, I always think about the American Soldiers and if they are winning. I have never once thought about the other side and how their country is getting destroyed. This project has made me realize that there is more to just America. It has broadened my horizons on the world and conflicts that are going on. I have always been really interested in war, and how the soldiers are feeling. This project let me explore that curiosity and learn so many things that I had been wondering about. I had heard about the Vietnam War from my sister’s project last year and I was very intrigued with the tunnels and different little tricks that were involved. Reading The Things They Carried by Tim O’Brien  also helped me to understand more of the war and things that you might not be able to get out of a war article or website. It gave me that extra little insight from a veteran that most people don’t get to have or understand. Even though I didn’t have that much background knowledge, I was a vital part of my group and couldn’t have done it without my group members as well, we worked as a wonderful team to create a beautiful product that we were proud of. 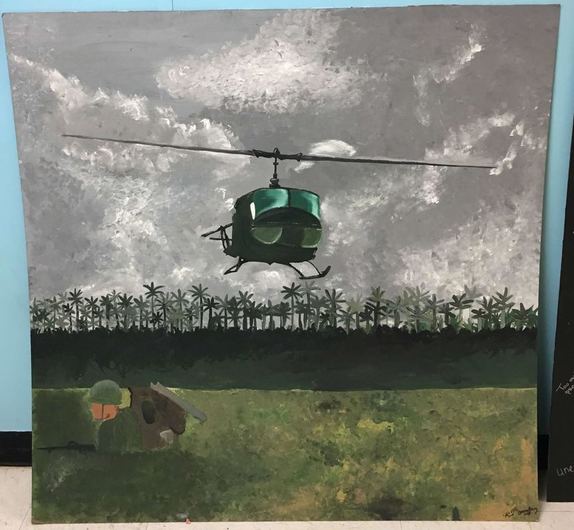 This mural was in the battlefield room, it shows a helicopter getting ready to land and evacuate a wounded solder. This was painted by Sierra Holiday and Sara Voss.