I dissected a lamprey and I was very disappointed, I thought that I would be able to see a lot more. This is partially because our lamprey was very small. Before we dissected, we did a lot of background knowledge. I learned a lot about lampreys such as:

-Lamprey feed off of blood and other bodily fluids from fish, sea lamprey can attack fish up to 40 pounds. Only 18 species of lamprey are called “parasitic”, the other species acquire food through filter feeding.

-Lamprey start as eggs, called ammocoetes, laid in streams. They burrow in fine sediment and filter feed until they hatch into larvae. When they hatch they are blind and can be up to 4 inches long. The larvae can spend up to eight years in this stage until they go through metamorphosis. Metamorphosis lasts 4-10 months, they do not eat during this period of their life. Lampreys spend about 4 years in the sea until they migrate back to freshwater, then they create nests out of rocks. Females can lay up to 100,000 eggs, once they are fertilized both the male and female die.

-Lampreys are only found in the Mediterranean and North Atlantic, in the coastal seas off the North East USA, Nova Scotia, southern Greenland, the UK, Ireland and Scandinavia. They can also be found in the Great Lakes and freshwater rivers to breed. 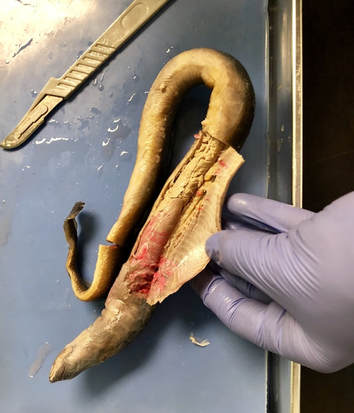 Today in biology, I observed a horseshoe crab dissection preformed by my class mates. The inter organs did not hold up very well so, as you can see in the picture, it looks all mushy inside. Horseshoe Crabs have 9 sensors/eyes including some on the ventral side. They have a hard shell to protects against predators. 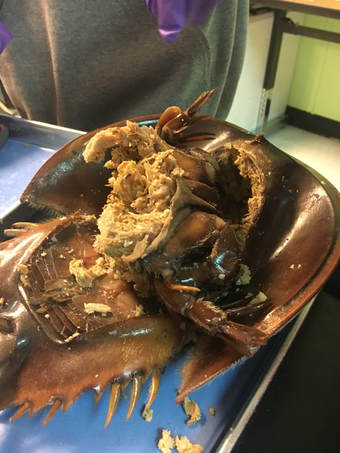